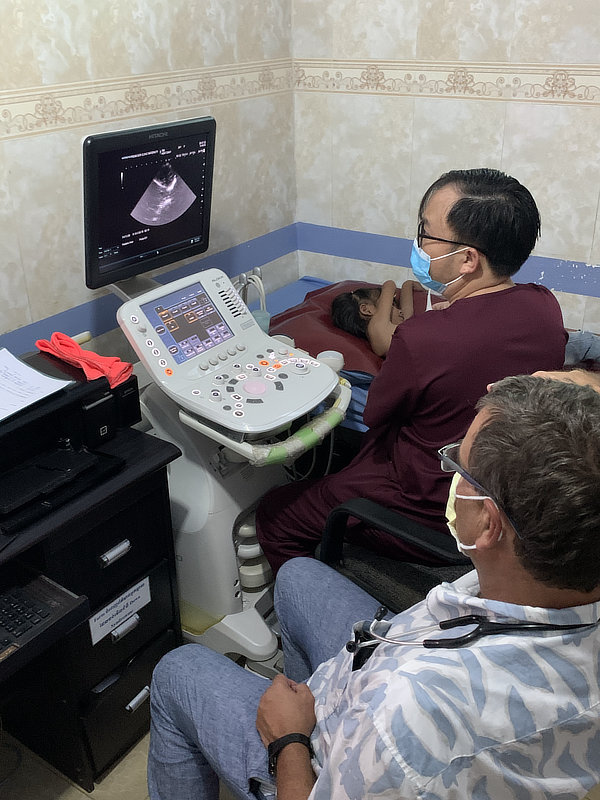 The primary focus of this mission was to assess the facilities and staff at Chenla Children’s Healthcare in Kratie Province, Cambodia, and specifically to determine the feasibility of developing a pediatric cardiac surgery program. Chenla Children’s Healthcare is the only pediatric hospital in this very remote province (estimated population ~400,000) and recently hired their first ever dedicated pediatric cardiologist, Dr. Kimseng, a critical first step in program development. The initial plan is to diagnose and treat new cardiac patients, as well as those with a known history of heart disease with appropriate and available medical therapies, refer patients in need of surgery or cardiac catheterizations to surgical centers, and to follow these patients post procedure. The long-term goal is to develop a pediatric cardiac surgical/intervention catheterization program on-site. We also had the privilege of visiting one of Chenla’s outreach clinics at a primary school located approximately 30 km from the Vietnam border.

Kratie province is located in the northeast region of Cambodia, along the Mekong River and the border of Vietnam to the south. Land mines are still present and Chenla hospital still receives victims. Over 80% of the population works in agriculture that consists of cashew nuts, cassava, mangos, durian, and rubber tree harvesting.

Chenla Children’s Healthcare works within the pediatric wards of the Cambodian government referral hospitals to strengthen and extend the government system’s ability to provide pediatric care. They use existing government facilities, equipment, pharmaceutical services and some staff, thereby strengthening the social contract between the local community and the public healthcare system. There are two fully operational healthcare centers: Kratie and a smaller satellite clinic in Modulkiri province. The Mondulkiri clinic is a three- hour drive from Kratie. Between the two facilities there is a total of 55 staff. The Kratie location has 11 physicians, two physician assistants, and 39 nurses.

Chenla Children’s in Kratie is located within the Kratie Provincial Referral Hospital compound. It is a separate, three story building that is over 100 years old. It is believed the building originally housed offices for trading companies as the Mekong River is roughly 200 yards in front of the complex. 3rd level was added.

Each month the Kratie outpatient department sees approximately 1,000 patients and between 180-290 patients are admitted to the hospital inpatient service. The ground floor of the hospital is used primarily for storage, and houses a CT scan room. There is no designated housing facility for patient families, whose only option is to sleep under the stairs or in the hallways. Many patients come from great distances with a family member and while admitted, the patients are supplied with infant formula or pediatric Ensure. The accompanying family member must provide for their own meals. Facilities for patient families are nonexistent: on-site kitchen, patient laundry facilities, limited toilets for family use and any food must be bought from vendors that line the perimeter of the hospital complex. The 2nd floor consists of the Pediatric Intensive Care Units (PICU), Neonate ICU (NICU), outpatient clinic, observation / nebulizer treatment room, director’s office, storage closet and toilets. The 3rd floor consists of classrooms/meeting rooms and a 15-bed inpatient ward. There are two rooms that can accommodate five overflow beds from the inpatient ward.

The maternity ward is located in a separate building, on the “government side” as Chenla staff refer to it. If an infant is born in need of emergent medical care, a bell is rung at the Children’s hospital and a medical team is immediately dispatched. Currently, if a child is in need of urgent surgery, one of two government physicians are called to assess the patient. Due to limited capabilities and if unable to operate onsite, Chenla Hospital has partnered with a Swiss funded pediatric hospital (Kantha Bopha Hospital) in Phnom Penh and the patient is transferred by ambulance. This is a five-hour drive and an average of 22 patients per month are transferred. Chenla will then provide follow up care. The hospital does have a portable X-ray machine and shares the laboratory with the government hospital.

A Japanese non-governmental organization donated $800,000 USD for the building of a new, modern and large surgery building for the government hospital; however, this is for adult care only. This building is currently serving as a maternity ward, a limited operating theatre and emergency services. The entire 2nd floor of this new facility is empty as the hospital is severely understaffed. Using $800,000 as a minimum target amount, Chenla Children’s Healthcare is in the process of soliciting donors for the building of their much-needed new facility.

Dr. Chanthou is the chief physician (intensive care) at Chenla Children’s and has been on staff since the hospital’s inception. We know him from the years we spent working at Angkor Hospital for Children and many of the staff have come from AHC. Dr. Kimseng also comes from AHC, started working at Chenla the beginning of July, and received his pediatric cardiology training under the mentorship of Dr. Pises Ngeth. Together, Paul and Dr. Kimseng saw patients in the Outpatient Clinic, rounded on patients in the NICU, PICU and Inpatient Ward and performed echocardiograms on cardiac patients. Since Chenla Children’s does not have an ultrasound machine for performing echocardiograms, patients were screened at a private clinic in Kratie that generously allowed use of their machine.

During our week at Chenla, we provided clinical and bedside teaching to the medical staff in the inpatient and outpatient settings, assisted with echocardiograms performed at an outside facility and gave lectures on basic echocardiography, pediatric cardiac-focused physical exam, basics of pediatric EKG and chest X-ray (CXR) interpretation to hospital physicians and nurses.

We spent one morning attending medical rounds in the NICU. At that time the unit was full at its ten bed maximum. Most of these patients were admitted due to prematurity (transferred from the adjacent labor and delivery facility or admitted directly from home delivery). Remarkably, most of these infants survive to discharge, despite not having therapies routinely used in the US including Total Parenteral Nutrition (TPN) and surfactant replacement therapy. In one case, we were able to guide the medical staff to rule out a PDA that subsequently enabled an imminent discharge on one infant whose birthweight was 0.98Kg. Sadly, in this case the mother of this infant died two days after birth due to complications from pre-eclampsia.

We also made rounds on the ICU patients with Dr. Kimseng. Initially, there were no cardiac patients. On our third night a male toddler was admitted with respiratory distress and an enlarged heart noted on CXR. Working closely with Dr. Kimseng, we were able to make the diagnosis of dilated cardiomyopathy and to formulate a treatment plan.

We spent one morning attending medical rounds with the inpatient team that included Dr. Kimseng and the inpatient attending physician. Of the 7 patients on the service, most were admitted due to infectious diseases.

We worked side by side with Dr. Kimseng during three half-day outpatient clinic sessions, typically seeing 6-8 patients per half-day clinic. Most of these patients were being seen for general pediatrics problems, most commonly acute infectious symptoms. One patient was being followed for nephrotic syndrome and another for immune thrombocytopenic purpura (ITP). Two patients with a known history of complex congenital heart disease (among the first to be seen by Dr. Kimseng at Chenla) were also seen: One with single ventricle physiology with severe hypoxia (carrying a very poor long-term prognosis), and the second with a variant of tetralogy of Fallot. To date neither patient has undergone any kind of cardiac intervention. In conjunction with Dr. Kimseng, we are aiming to refer the first patient to the Swiss Hospital in Siem Reap for consideration for surgical palliation, at the very least a Blalock-Taussig shunt. The second patient is clinically stable but will need definitive surgical repair to ensure long-term survival.

We spent a half day working side by side with Dr. Kimseng performing echocardiograms at the outside private facility. Chenla had recently purchased a pediatric size transducer in anticipation of our arrival, in order to enable pediatric echocardiograms to be performed. We worked closely with Dr. Kimseng to further characterize known cases of congenital heart disease in the two patients described above, confirm the diagnosis of dilated cardiomyopathy in the toddler described above, rule out the presence of a PDA in the premature infant described above, and to rule out heart disease in two additional patients.

Paul gave lectures to the medical staff at Chenla on the following topics:

In summary, our first experience with the Chenla hospital was extremely enlightening, exhilarating, inspiring but also sobering. We were particularly impressed with the extraordinary ability of the physicians at Chenla, who are committed to practicing state-of-the art pediatric medicine in an environment with extremely limited resources. One obvious example is their ability to care for severely premature newborn infants without the standard therapies that we use in the US. Regarding the future of a pediatric cardiac program, the hospital faces many challenges. The most obvious is the lack of a pediatric ultrasound machine for performing pediatric echocardiograms. The other most obvious challenge is the lack of appropriate infrastructure for being able to perform pediatric cardiac surgeries and potentially catheterization procedures. We are very encouraged by the competence and commitment of the medical staff and the leadership of the hospital. We believe that with the appropriate support and time, there can be a bright future for Chenla Children’s Healthcare having a significant role in the diagnosis and management of children in Cambodia with congenital and acquired heart disease.